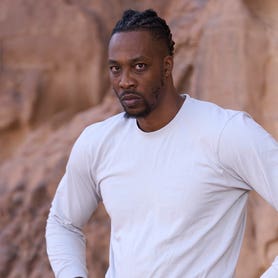 Dwight David Howard II is one of the NBA’s most charismatic veteran players, who is entering his 19th season in the NBA. He became an NBA Champion with the Los Angeles Lakers, an eight-time NBA All-Star, eight-time All-NBA Team honoree, five-time All-Defensive Team member, and a three-time Defensive Player of the Year. Howard also bears the distinction of being the first player in NBA history to earn the honor of Defensive Player of the Year for three consecutive seasons. With a life and career that extend beyond stadiums and arenas, Howard also is a filmmaker, community leader, media figure and philanthropist. Expanding his focus the past few years, Howard took his first steps as an actor where he amassed credits with such films as “The Equalizer 2,” “The Three Stooges” and “Free Birds.” He also surprised television audiences during his reveal as “The Octopus” on Season Six of the smash FOX series THE MASKED SINGER and guest-starred on Season Eight of the acclaimed comedy “Black-ish.” Howard also has appeared in “The Odd Couple,” “Liv and Maddie,” “Mighty Med” and “Never Have I Ever.”