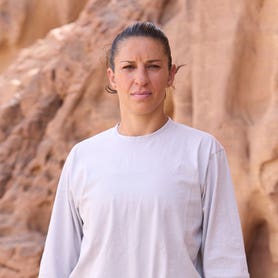 Two-time Olympic gold medalist and two-time World Cup Champion Carli Lloyd is a former soccer legend who played for the U.S. Women’s National Soccer Team for 17 years (2005-2021). She was awarded the most prestigious and highest award in soccer: FIFA World Player of the Year (2015 and 2016); only one other American player has received the award twice. She is a two-time Olympic gold medalist (2008 and 2012) and a bronze medalist (2020). She holds the unique distinction of scoring in every Olympic medal match, including the 2008 gold medal match against Brazil, a brace in the 2012 gold medal game against Japan, and a brace in the 2020 bronze medal game against Australia. Lloyd holds the record for all-time leading scorer in USWNT Olympic history with 10 goals. She is the only American player to score in four different Olympics (2008, 2012, 2016, 2020).  She became the first player in FIFA Women's World Cup to score a Hat Trick in a World Cup Final (2015). She was awarded the Golden Ball (MVP) and Silver Boot at the 2015 World Cup. She ended her career having scored 134 goals in 316 caps (games played), which ranks 3rd all-time on the international stage for men and women. She also runs her own CL10 Soccer Clinics for ages 8-18, for both boys and girls. The bestselling author of “When Nobody Was Watching,” she empowers audiences to find their own success with lessons from both in and beyond the world of sports.