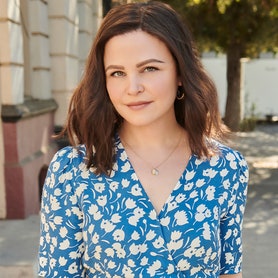 A multi-faceted film, television and theater actress, Ginnifer Goodwin is best known for her role as “Margene” in the critically acclaimed premium cable series “Big Love,” and as “Snow White,” in the hit network drama “Once Upon A Time.”

In 2019, Goodwin starred in Marc Cherry’s “Why Women Kill,” alongside Lucy Liu and Kirby Howell-Baptiste; Jordan Peele’s critically acclaimed reboot of “The Twilight Zone”; and in “Dolly Parton’s Heartstrings,” alongside Kathleen Turner.

In 2017, Goodwin starred as “Marianne” in the play “Constellations” at The Geffen Playhouse in Los Angeles, opposite Allen Leech. Prior to this, she was seen onstage in “The Corn Is Green” at the Williamstown Theatre Festival, and she appeared in her first play, “Dead End,” at Boston's Huntington Theatre Company in 2000.

In 2016, she voiced the lead role of “Judy” in the widely successful animated film “Zootopia,” which grossed more than one billion dollars worldwide and won an Academy Award, Golden Globe Award, Critics' Choice Movie Award and Annie Award for Best Animated Feature Film.

Goodwin’s breakthrough role came from her first feature film, “Mona Lisa Smile,” in which she co-starred alongside Julia Roberts and Kirsten Dunst. Since then, she has appeared in several critically acclaimed films, including the Academy Award-nominated biopic “Walk The Line,” opposite Joaquin Phoenix and Reese Witherspoon, as well as Tom Ford’s directorial debut, “A Single Man.”

Other film and television credits include “Something Borrowed”; “He’s Just Not That Into You,” alongside Jennifer Aniston and Jennifer Connelly; Robert Luketic’s romantic comedy, “Win A Date With Tad Hamilton”; “Ramona And Beezus”; Jonathan Kasdan’s “In The Land Of Women”; the telepic “Killing Kennedy,” alongside Rob Lowe; the animated film “Tinker Bell And The Legend Of The Neverbeast”; and the independent films “Day Zero,” with Elijah Wood, and “Birds Of America,” with Matthew Perry and Hilary Swank.

Born in Memphis, TN, Goodwin holds a B.F.A. in acting from Boston University’s School for the Arts. She was trained in England at Stratford-Upon-Avon’s Shakespeare Institute, London’s Royal Academy of Dramatic Art and the London Academy of Music and Dramatic Art.