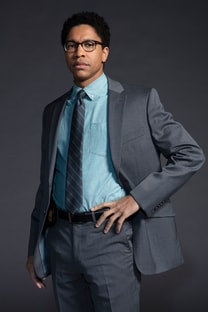 Aaron Clifton Moten recently was seen on the acclaimed streaming series “Disjointed,” as Kathy Bates’ son. He appeared on the award-winning cable mini-series “The Night Of,” as well as the streaming series “Mozart in the Jungle.” He also can be seen opposite Meryl Streep in the feature film “Ricki and the Flash,” and starred in the production of the critically acclaimed play “The Flick,” at The Barrow Street Theatre.

A Juilliard alumnus, Moten’s wide range of theatrical credits include “A Streetcar Named Desire” on Broadway; “King Lear,” directed by Ed Iskandar; “The Life of King Henry the Fifth,” directed by Nigel Smith; “The Seagull,” directed by Richard Feldman; and “A Raisin in the Sun,” directed by Jade King Carroll. Regional theater credits include “Much Ado About Nothing” and “Sweeney Todd” at Texas Long Center. Most recently, he starred in “Romeo & Juliet” at San Diego’s The Old Globe.