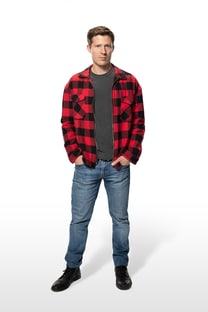 Zach Gilford is best known for his role as “Matt Saracen” on the Emmy Award-winning drama series “Friday Night Lights.” Gilford recently starred in the cable series “This Close” and the network drama “Good Girls.” He also played the lead role in the 2017 sci-fi streaming series “Lifeline.” In 2016, Gilford starred in the thriller series “The Family,” created by Jenna Bans. Gilford was a series regular on the FOX series “The Mob Doctor,” which was based on the novel “II Dottore: The Double Life of A Mafia Doctor.” He’s also starred in “Dare,” opposite Emmy Rossum; “Super,” opposite Ellen Page and Rainn Wilson; and “Post Grad,” opposite Alexis Bledel, Michael Keaton and Carol Burnett. His past television credits also include “Off the Map,” “Grey’s Anatomy” and “Law & Order: SVU.” Gilford made his feature film debut starring in Larry Fessenden’s “The Last Winter,” which was nominated for a 2008 Gotham Award for Best Ensemble Cast. He also appeared in “Rise: Blood Hunter,” opposite Lucy Liu. Additional film credits include “The Purge: Anarchy,” directed by James DeMonaco, for which he was nominated for a 2015 MTV Movie Award; “Devil’s Due,” directed by Matt Bettinelli-Olpin and Tyler Gillett; Jee Woon Kim’s “The Last Stand,” opposite Arnold Schwarzenegger; and the independent feature “In Our Nature” with John Slattery, Gabrielle Union and Jena Malone.