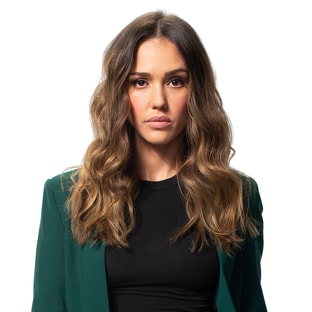 Jessica Alba gained worldwide recognition in the television series “Dark Angel,” created by James Cameron. Her first starring role in a major studio film, the 2003 release “Honey,” grossed more than $60 million worldwide. She has since made more than 25 feature films, which have earned a combined box office total of more than $800 million. Highlights of her film career include her starring role opposite Bruce Willis in the critically acclaimed “Sin City,” directed by Robert Rodriguez and Frank Miller, and Marvel’s blockbuster action-franchise, “Fantastic Four.” Upcoming projects include “Parenting Without Borders,” a docuseries she will host and produce.

Alba has received Golden Globe and People’s Choice Award nominations, was voted TV Guide readers’ Breakout Star of the Year and won Favorite TV Actress at the 2001 TEEN CHOICE Awards for “Dark Angel.” She won the Nickelodeon Kids’ Choice Award for Favorite Female Actress for her performance in “Fantastic Four” and an MTV Movie Award for Sexiest Performance in “Sin City.” She received multiple American Latino Media Arts Awards, among many other awards and honors.

Alba is Founder of The Honest Company and Honest Beauty. Founded in 2012, The Honest Company is a mission-driven consumer products company dedicated to empowering people to live happy, healthy lives. Since its inception, the company has donated more than 21 million products and more than 17,900 employee participation hours through its Honest to Goodness program, and has been honored with a wide range of recognitions and awards.

In 2013, Alba released her first book, the New York Times bestseller, “The Honest Life,” a how-to handbook based on her mission to create a natural, authentic and non-toxic life for her family. Alba appeared on the cover of Forbes’ Self-Made Women issue and was among the Top 20 of Fast Company’s 100 Most Creative People in Business; one of CNBC’s Next List of Rebels, Leaders and Innovators; and one of Fortune’s 10 Most Powerful Women Entrepreneurs. She has been named to Vanity Fair’s Next Establishment and Entrepreneur of the Year at the U.K. Glamour Women of the Year Awards. Alba has received the March of Dimes Grace Kelly Award, the Entertainment Media Association’s Green Parent Award and the Mount Sinai Children’s Environmental Health Center Champion for Children Award.