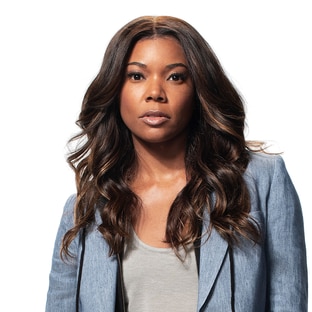 Gabrielle Union starred in the cable series “Being Mary Jane,” created by Mara Brock Akil, from 2013-2019. Union earned rave reviews for her performance as “Mary Jane” and received a 2014 NAACP Image Award for “Outstanding Actress in a Television Movie, Mini-Series or Dramatic Special” for the role.

On the big screen, Union’s most recent film project “The Public” had a limited release on April 5, 2019. She starred opposite Alec Baldwin, Taylor Schilling, Jena Malone, Emilio Estevez and Che “Rhymefest” Smith. Union’s other film credits include Baran bo Odar’s “Sleepless,” “Top Five,” “Think Like a Man,” “Think Like a Man Too,” “Good Deeds,” “In Our Nature,” “Cadillac Records,” “The Perfect Holiday,” Tyler Perry’s “Daddy’s Little Girls,” Ryan Murphy's “Running with Scissors,” the blockbuster hit “Bad Boys II,” “Breakin’ All The Rules,” “Deliver Us From Eva,” “Bring It On,” “Welcome to Collinwood,” “Abandoned,” “Two Can Play That Game,” “Love & Basketball,” “Cradle to the Grave,” “Ten Things I Hate About You,” “The Brother,” “Neo Net,” “The Honeymooners,” “Meet Dave” and “She’s All That.”

Union also was seen in the four-hour television documentary series “Half The Sky,” based on the best-selling book by Pulitzer Prize winners Nicholas Kristof and Sheryl WuDunn. On the small screen, Union made her debut in the hit comedy “Moesha,” and then went on to guest-star on such hit shows as “ER,” “Dave’s World” and “The Steve Harvey Show.” She had recurring roles on the hit shows “Sister, Sister” and “7th Heaven.” Union also stirred things up when she guest-starred as a love interest to both “Joey” (Matt LeBlanc) and “Ross” (David Schwimmer) on “Friends,” and with this role, Union marked the first African-American love interest on the series. She also joined the cast of Steven Bochco’s “City of Angels” for one season and was seen on “Flash Forward,” “Life” and “Ugly Betty.” In addition, she starred in the critically acclaimed series “Night Stalker,” opposite Stuart Townsend, and was also seen in the award-winning “Something the Lord Made,” opposite Alan Rickman, Kyra Sedgwick and Mos Def.

In 2018, Union formed the production company I’ll Have Another, with the goal of telling stories that center on marginalized communities in an authentic manner. I’ll Have Another develops broadcast, cable and streaming series for television with a strong emphasis on feature films in both the studio and independent space. In 2017, Union added New York Times best-selling author to her credits with the release of her book, “We’re Going To Need More Wine: Stories That Are Funny, Complicated and True.” Released by Dey Street Books, the book is formatted in a series of essays and features personal stories and reflections on a range of topics that continue to define the contemporary landscape: sexuality, womanhood, friendship, race, marriage and beauty. The book was most recently released in paperback in January 2019. Inspired by the birth of her daughter, Union wrote her first children's book, “Welcome to the Party,” which reads as a love letter from parents to their children about the party that is life. The book was released by Harper Collins on May 5, 2020.

In May of this year, Union joined the organic kids’ snack company Bitsys as a co-founder with a goal of making healthy, allergen-friendly, school-safe snacks accessible and affordable for all families, regardless of geography or socioeconomic status. Union is also the face of NY&Co’s 7th Avenue collection and has her own exclusive namesake collection for the brand that is currently available for purchase. Last month, Union relaunched her haircare brand, “Flawless,” for women with natural hair. Union’s passion for acting is rivaled by her role as leader and advocate for inclusion in the entertainment industry. She is also a champion of breast health and combating sexual violence.