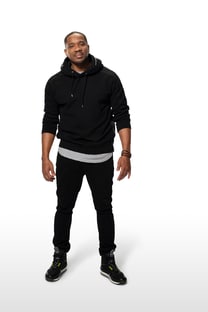 Duane Martin is an accomplished actor, writer and producer. He appeared as himself in the hit cable comedy “Real Husbands of Hollywood,” starring opposite Kevin Hart, which ran for five seasons. He also starred on the comedy series “All of Us,” produced by and loosely based on the lives of Martin’s longtime friends, Will Smith and Jada Pinkett-Smith. At the 38th NAACP Image Awards, Martin was a nominee for Outstanding Actor in a Comedy Series in recognition of his work on the series. He also was nominated for a Daytime Emmy for his role in the TV special “Different Worlds: A Story of Interracial Love.” He also produced and starred in the FOX series “Getting Personal.” Additionally, he appeared in Paul Reiser’s comedy, “The Paul Reiser Show,” and starred opposite Patti LaBelle in the comedy series “Out All Night.” He also hosted 20 episodes of late-night talk show “Later.” On the big screen, Martin wrote, produced and starred in “The Seat Filler,” with Kelly Rowland of Destiny’s Child. He starred opposite LL Cool J and Gabrielle Union in “Deliver Us from Eva.” He also wrote, produced and starred in “Ride or Die,” opposite Vivica A. Fox. Martin wrote the script, raised the financing, shot the movie and sold it all within six months. The New York Knicks drafted the native of New York and NYU graduate before he pursued an acting career. His love for sports and his entrepreneurial mind inspired him to become one of the youngest African-American owners of a sports management company, Impact Sports. He brokers deals and has handled the careers of many of today’s top athletes, including future Hall of Fame wide receiver Cris Carter, All-Star pitcher Jose Valverde, NBA World Champion Vinnie “The Microwave” Johnson, and four-time Olympic Gold Medal Winner Teresa Edwards.