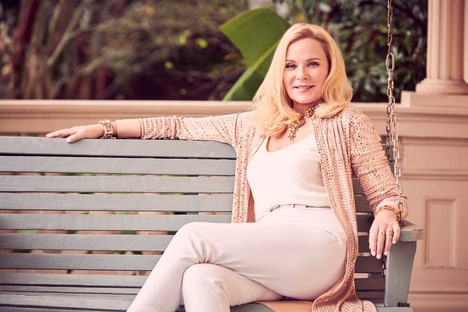 Kim Cattrall has had an extensive acting career that spans film, stage and television. The British-born actress was raised in Canada and most recently returned to television as producer and star of the Canadian series “Sensitive Skin.” Based on the British dramatic comedy series of the same name, the show was nominated in 2015 for an International Emmy Award. Cattrall was nominated for a Canadian Screen Award in 2017 for her role as “Divina Jackson.”

She most recently was seen in “Horrible Histories: The Movie – Rotten Romans,” a feature based on the popular children’s book series by Terry Deary and illustrated by Martin Brown. Additional film credits include “The Ghost Writer” and “Meet Monica Velour,” as well as “Sex and the City” and “Sex and the City 2,” in which she reprised her award-winning role as the infamous “Samantha Jones.” For her work on the hit cable series “Sex and the City,” Cattrall was recognized with a Golden Globe, two Screen Actors Guild Awards and five Emmy Award nominations.

On TV, Cattrall most recently was featured in Season Two of the Swedish hit crime series “Modus,” playing the role of the President of the United States. She also appeared as “Emily French” in the television miniseries “The Witness for the Prosecution,” which was nominated for a 2017 British Academy of Film and Television Arts TV Award for Best Mini-Series. In 2010, she received a Gemini Award for her role in the animated series “Producing Parker.” Cattrall also starred in the British miniseries “Any Human Heart,” based on the novel by William Boyd.

On stage, Cattrall has been seen on the West End in “Sweet Bird of Youth” and Richard Eyre’s “Private Lives,” which also received a Broadway run. She starred in “Antony and Cleopatra” at the Liverpool Playhouse, David Mamet’s “The Cryptogram” and Peter Hall’s production of “Whose Life is it Anyway?,” as well as “Wild Honey,” “Miss Julie,” “The Misanthrope,” “Three Sisters” and “A View From the Bridge.”

A best-selling author, Cattrall has written several books, including “Satisfaction,” “Sexual Intelligence” and “Being a Girl: Navigating the Ups and Downs of Teenage Life.” In 2009, Cattrall was inducted into Canada’s Walk of Fame and, in 2011, she was honored by GLAAD with the prestigious Golden Gate Award for her support of the organization.