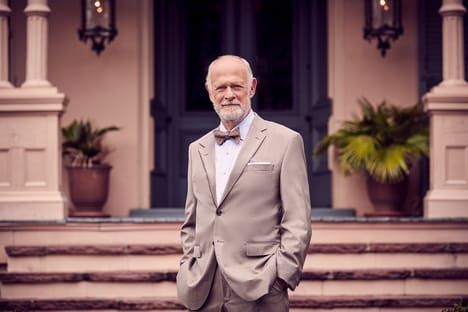 Gerald McRaney’s career continues to thrive both on the big and small screens. He most recently reprised the role of legendary “George Hearst” in “Deadwood,” based on the award-winning series. In addition, he starred opposite his wife, Delta Burke, in the 2019 streaming anthology series “Dolly Parton’s Heartstrings.” In 2017, he won his first Emmy Award for Outstanding Guest Actor in a Drama Series for his endearing role as “Dr. K” on “This is Us.”

His recent credits include a recurring role on the drama series “Shooter,” opposite Ryan Phillippe; the feature film “Best of Me,” based on the best-selling Nicholas Sparks novel, opposite James Marsden and Michelle Monaghan; and “Focus,” opposite Will Smith and Margot Robbie. McRaney portrayed billionaire businessman “Raymond Tusk” on the award-winning streaming drama “House of Cards.” He also portrayed “Barlow Connelly” on contemporary Western drama “Longmire” and, in 2019, simultaneously performed arcs on “NCIS: LA” and “A Million Little Things.” For many years, McRaney has been a staple on television, playing memorable roles on popular series such as “Simon and Simon,” “Major Dad,” “The Promised Land,” “Deadwood,” “Jericho” and J.J. Abrams’ “Undercovers.”

A few years ago, he made his Broadway debut in the New York premiere of Horton Foote’s play, “Dividing the Estate.” McRaney currently chairs the Horton Foote Award Committee of the Natchez Literary and Cinema Celebration, which annually recognizes outstanding screenwriting. In 2003, he also appeared on stage in the critically acclaimed Off-Broadway play “The Exonerated.” McRaney takes pride in being a character actor who continues to play many roles over the course of his long career.