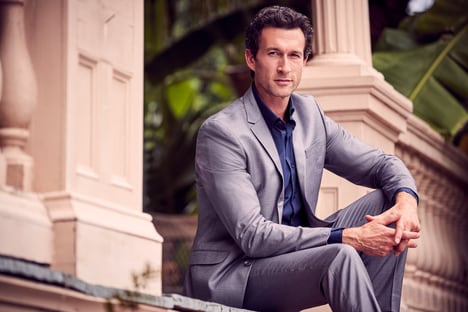 On film, Aaron Lazar has worked with acclaimed directors Clint Eastwood (“J. Edgar”), Martin Scorsese (“The Wolf of Wall Street”), Shawn Levy (“This is Where I Leave You”), Mary Harron (“The Notorious Bettie Page”) and the Russo brothers (“Avengers: Infinity War” and “Avengers: Endgame”).

On television, recurring roles include “Quantico,” “The Strain,” “Girl Meets World” and “The Onion News Network.” His television guest-star roles include “The Blacklist,” “Blue Bloods,” “The Good Wife,” “Bull,” “The Good Fight,” “Unforgettable” and FOX's “The Following.”

Lazar has starred in 11 Broadway productions. He debuted in “The Phantom of the Opera”; originated roles in the world premieres of “A Tale of Two Cities,” “Impressionism” and “The Last Ship”; starred in the revivals of “A Little Night Music” and “Les Miserables”; and romanced audiences in “The Light in the Piazza” at Lincoln Center. Last year, he starred as “Larry Murphy” in the first national tour of the Tony Award-winning musical “Dear Evan Hansen.”