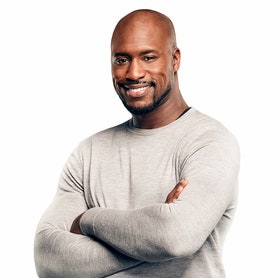 During his 15-year career in the NFL, Vernon Davis established himself as one of the most dominant tight ends in the game. Today, he's proving himself as a Hollywood actor and producer, budding entrepreneur and dedicated philanthropist. Since retiring from the NFL during a Super Bowl commercial in 2020, Davis has filmed several movies, including one with John Malkovich (“The Chariot”), two with Bruce Willis (“Gasoline Alley” and “A Day to Die”) and one with Morgan Freeman (“Muti”), among others. He also has founded two production companies – Reel 85 and Between the Linez Productions. In fact, he recently produced his first film, “A Message from Brianna,” a supernatural horror thriller that debuted in November 2021 at the American Black Film Festival.

As a budding entrepreneur, Davis has aligned himself with several purpose-driven companies. He owns multiple Jamba Juice franchises and his very own supplement company, Timeless. He also is the co-owner of Q-Collar Innovations, a developer of innovative products intended to reduce traumatic brain injury; and the co-owner and marketing advisor for Pescavor Jerky, a sustainable seafood jerky company. In addition, he is partnered in PathWater, a new concept in bottled water that was created as a solution to help end single-use plastic pollution, as well as RIFF, an Oregon-based cold-brewed coffee company. Finally, Davis is a Limited Partner of Next Play Capital, a venture capital investment platform structured to provide specialized investors access to top venture capital funds and companies.

Davis founded the Vernon Davis Foundation in 2011, as a way to promote art education and appreciation among the youth. Today, the foundation takes a holistic approach, focusing on the overall health, education and well-being of children from disadvantaged backgrounds. By providing essential resources, such as scholarships, grants, learning materials, meals and clothes, the foundation strives to service and inspire young leaders of tomorrow.