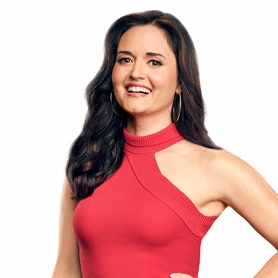 Actress, author, producer and speaker Danica McKellar was first introduced to audiences as “Winnie Cooper” on the iconic television classic “The Wonder Years,” since which time she has enjoyed a longstanding career in entertainment, including network, cable and streaming comedy and drama, and beyond. McKellar currently recurs on “Home Economics,” and in January 2022, she starred in the romantic comedy “The Winter Palace.”

McKellar has testified before a Congressional subcommittee about the importance of women in math and science, and she was named “Person of the Week” by ABC World News for tackling math education and simultaneously breaking the stereotype of the “math nerd” with her highly entertaining and illuminating books.

Now a New York Times best-selling author, McKellar’s series of ten groundbreaking “McKellar Math” books includes “Math Doesn’t Suck and Kiss My Math,” which teach teens how to master tough mathematical concepts in the context of fun stories. McKellar received the unique honor of being chosen to read her bestselling children’s book, “Goodnight Numbers,” at the Library of Congress, a book selected by Dolly Parton for ongoing inclusion in her prestigious charity “Imagination Library.” Her most recent book, “The Times Machine,” which teaches common core methods to third and fourth graders using cartoons and comic strips, was named a 2020 Amazon Book of the Year, and her 11th book, “Double Puppy Trouble,” hits the shelves in July 2022. To date, McKellar’s books have sold more than two million copies worldwide.