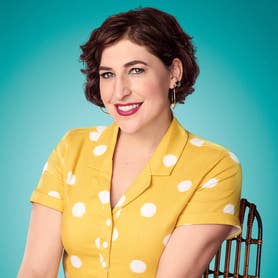 Mayim Bialik is best known for her award-winning role as “Amy Farrah Fowler” on the hit network comedy “The Big Bang Theory.” During her eight-year run on the show, she received two Critics Choice Awards, four Emmy Award nominations and a SAG Award nomination. Following the iconic show’s ending, Bialik signed a multiyear overall deal with Warner Bros. Television Group for her production company, Sad Clown Productions. She recently took on the role of TV show host on “Celebrity Show-Off,” produced by The Masked Singer’s Craig Plestis. Outside of the realm of television, she’s written her first screenplay, “As Sick As They Made Us,” which she’s set to direct in 2021; and recently launched a podcast on mental health, “Mayim Bialik’s Breakdown.” From playing the young version of Bette Midler’s character in “Beaches” to her turn as “Blossom Russo” in the iconic ’90s sitcom “Blossom,” Bialik has appeared in numerous beloved roles throughout her dynamic acting career.

An acclaimed author, Bialik has written two #1 New York Times best sellers, “Girling Up: How to Be Strong, Smart and Spectacular,” and the recently released “Boying Up: How to Be Brave, Bold and Brilliant.” She also has written a parenting book, “Beyond the Sling,” and a cookbook, “Mayim’s Vegan Table.” Bialik has recently dedicated her skills as a writer, actress, neuroscientist and mother to driving the lifestyle website GrokNation.com, which she started in 2015.

Following the end of “Blossom,” Bialik left acting for 12 years to earn a B.S. in neuroscience from UCLA in 2000, with a minor in Hebrew & Jewish studies. She went on to complete her PhD in neuroscience, also at UCLA, and then completed her doctorate in the fall of 2007, which examined the role of oxytocin and vasopressin in Obsessive-Compulsive Disorder in adolescents with Prader-Willi syndrome. While at UCLA, Bialik was a dedicated student leader in UCLA Hillel, including conducting and writing music for UCLA’s Jewish acapella group.