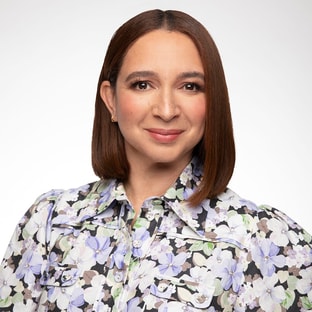 Maya Rudolph is an Emmy Award-nominated actress, who has established herself as a captivating, versatile performer across comedy, drama and music. Rudolph is most widely known for her turn on “Saturday Night Live,” where she was one of the show’s regular players for more than seven years, as well as her various television projects and film appearances.

Since her debut on “SNL” in 2000, Rudolph’s memorable portrayals include Oprah Winfrey, Whitney Houston, Donatella Versace and Beyoncé. She also is known for such recurring sketches as “Wake Up Wakefield” and “Bronx Beat.” She received a 2020 Emmy Award nomination for her guest appearance portraying Senator Kamala Harris. Rudolph will next be seen in Adam Sandler’s streaming comedy “Hubie Halloween,” alongside Kenan Thompson, Kevin James, Julie Bowen and Steve Buscemi.

Rudolph recently joined the voice cast of the upcoming animated feature comedy “The Willoughbys,” based on Lois Lowry’s popular book of the same name, which will also feature the voices of Terry Crews, Martin Short, Jane Krakowski and Sean Cullen. In 2019, Rudolph was seen in the streaming comedy “Wine Country,” alongside Amy Poehler, Rachel Dratch, Ana Gasteyer, Paula Pell, Emily Spivey and Tina Fey. Rudolph also lent her voice to a character in “The LEGO Movie 2: The Second Part.” She was a recurring character on the network comedy “The Good Place,” earning her 2018, 2019 and 2020 Emmy nominations for Outstanding Guest Actress in a Comedy Series for her role as “Judge.” She also guest-voices on the animated comedy series “Big Mouth,” alongside Nick Kroll, John Mulaney, Jordan Peele, Fred Armisen and Jenny Slate. She is nominated for a 2020 Emmy Award for Outstanding Character Voice-Over Performance for her role on the show.

In 2018, Rudolph was seen in the series “Forever,” which she produced. She also starred in Ben Falcone’s “Life of the Party,” alongside Melissa McCarthy. Additionally, Rudolph starred in “The Happytime Murders,” opposite McCarthy and Elizabeth Banks. Later that year, Rudolph also announced the formation of her production company, Animal Pictures, with her longtime friend, Natasha Lyonne.

In 2017, Rudolph lent her voice to two animated films, “The Emoji Movie” and “The Nut Job 2: Nutty by Nature.” In 2016, Rudolph starred in the variety show “Maya and Marty,” alongside Martin Short. She also lent her voice to the animated film “The Angry Birds Movie.” Additionally, she appeared as “Deborah” in Akiva Schaffer and Jorma Taccone’s “Popstar: Never Stop Never Stopping.” Also in 2016, Rudolph starred alongside Danny Glover in Diego Luna’s “Mr. Pig.” The film premiered at the 2016 Sundance Film Festival. For her role in the film, Rudolph was nominated for a 2017 Ariel Award for Best Actress. In 2015, Rudolph appeared in the hit comedy movie “Sisters,” opposite Tina Fey and Amy Poehler. Rudolph created and starred in her well-received comic-variety show special, “The Maya Rudolph Show,” which aired in 2014.

Rudolph has recently teamed up with musician Gretchen Liberum to form the female-fronted Prince cover band, Princess. In 2016, the duo became an immediate Internet success when they performed “Darling Nikki” on “Late Night with Jimmy Fallon.” Since then, the band has continued performing, as Prince fans everywhere have tuned in praising their pristine mimicry of the artist.