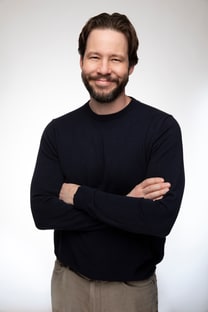 ke Barinholtz is one of the most sought-after comedians, writers and actors in the comedy world. Barinholtz most recently was seen in “The Oath,” alongside Tiffany Haddish, which marked his feature directorial debut. Last summer, Barinholtz starred in “Blockers,” alongside John Cena and Leslie Mann. Additionally, he wrapped the final season of “The Mindy Project” in 2017, on which he also served as a writer and producer in past seasons. Other feature credits include the comedy “Snatched,” alongside Amy Schumer and Goldie Hawn; “Neighbors”; “Neighbors 2”; “Suicide Squad”; and “Sisters,” opposite Amy Poehler and Tina Fey. He also wrote the action comedy “Central Intelligence” with his writing partner, David Stassen, in 2016.